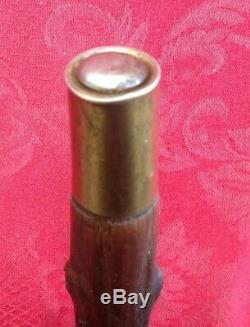 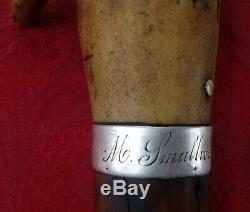 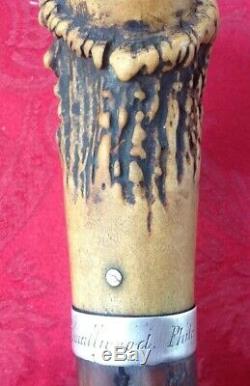 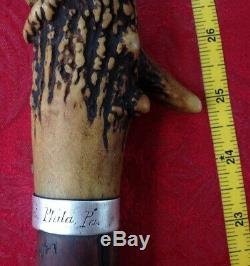 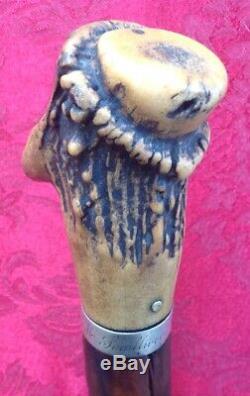 The walking stick measures 34 1/8" long, while the carved antler knob handle measures 3 1/2" tall, 2 1/2" wide at its widest point, and the circumference of the top of the knob is 5 1/4". The natural antler is fairly large and would have come from a large horned stag. The antler is mounted to the wooden shaft with brass pins, which I have polished. The silver band and plug mount are most likely Coin Silver, but I have not tested it... They should be at least 800 Silver, but may be 900 Silver, depending on the coinage that was melted and used to make it.

The knobby wood shaft has some naturally occurring splits in it here and there, as shown. There is one knot hole close to the top that has a Coin Silver plug mount on one side, which is most likely the front side of the walking stick. The Coin Silver band is engraved as follows: M. This person is the man whom the cane was originally made for, or originally presented to as a gift. The man's name is attributed to one of two people, both named the same, one a father, and the other his son.

The person is Manly Smallwood of Northern Liberties Philadelphia, PA and Camden County, NJ. He enlisted into the Army and in 1793 rose to the rank of Colonel in the Continental Army.

He moved to Camden County, New Jersey after being disowned by the Quakers due to his military service and his marrying a non-Quaker woman. Much less is known of him in comparison to the father.

I firmly believe that the walking stick is the father's, Colonel Manly Smallwood, as it is more plausible that the cane was presented to him for his military service and for his standing in the community. It is a German characteristic that is not lost here. The walking stick is in very good condition, as shown. I have cleaned the original surface, polished the silver and brass mounts, and waxed the piece, to preserve and protect it.

It does have some natural splits and drying cracks in the wood, along with the knot hole, but those are normal and superficial, not structural. The one and only issue with the cane is that the ferrule on the bottom tip of the walking stick has been replaced at some point in its life, with a "make-do" repair or replacement, as shown. It looks fine in my opinion, but has definitely been replaced. Please review all of the photographs for additional condition reporting. The item "Antique 1820's Cane Walking Stick Coin Silver Band Carved Antler Handle Knob 34" is in sale since Friday, April 10, 2020.